PD Bird began performing in local bars in Charleston, WV.  His first show was on January 18, 2012 at the Charleston Cellar.  Within a year and a half, he added some friends and has became fairly popular on the music scene.  PD Bird and Friends has opened for World Class acts such as Tim Reynolds (TR3 and Dave Matthews' guitarist), the Hackensaw Boys and Brent Cobb!

PD Bird took his show on the road, making Nashville, Tennessee his home away from home.  From playing slots during CMA Fest, to taking fiddle lessons at legendary Shiloh Music Store, PD quickly became a part of the music scene in Nashville.  He also began playing lead guitar and leading the praise band at Lighthouse.

A family emergency brought PD back to Charleston, WV to care for his father.  During this time, he has been working on new material for his second album.  He has also served stints playing bass for his friends in Pantry's Party and filling in on guitar at River Ridge.  As his father's condition improves, he is slowly coming back into the world of live performances!

PD Bird has a large number of friends that he calls upon depending on the type of show being performed.  From solo gigs to full bands, PD Bird keeps it fresh! 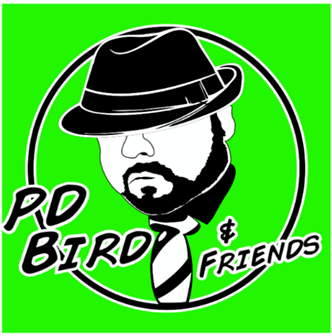 Want PD Bird and Friends to let their soul glow at your venue? Clickhere to contact us.